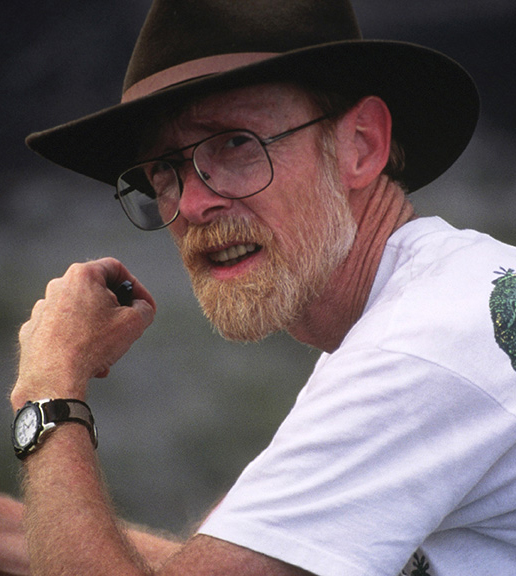 General Ecology (BIO 250) 4 Credits. This course, required of all Biology majors regardless of track, is taught on a rotation basis by several members of the EEB faculty. I will teach it in Fall Semester of even-numbered years. The course is an introduction to ecology and is intended for undergraduates. There are lecture and laboratory components

Special Topics in Organismal Biology: Herpetology (EEB 461) 3 Credits. This course is taught in Spring Semester of odd-numbered years. Lectures are devoted to consideration of the evolution, ecology, and behavior of amphibians and reptiles. The laboratory and field trips emphasize identification and adaptive radiation.

Foundations: Readings in Ecology (EEB 509) 2 Credits. This course introduces graduate students and advanced undergraduates to the seminal literature in ecology and requires reading of “classic” publications in ecology oaired with their recent “descendants.” The course format is discussion. The course is offered every Spring Semester.

Zoogeography (EEB 583) 3 Credits. This is actually a broad-based, biogeography course intended for graduate students and advanced undergraduates. It is intended to introduce foundation and current research attempting to describe and explain the determinants of the geographic ranges of individual species as well as local and global patterns of species distributions. Since 2000, the course has been co-taught by Dan Simberloff. It is offered in the Spring Semester of even-numbered years.

Research emphasizes field and laboratory investigations of 1) geographic variation in the reproductive biology, ecology, genetics, and behavior of the lizard Anolis carolinensis (the green anole), and 2) interactions between invading species, as exemplified by A. sagrei (the brown, or Cuban, anole) and native congeners, exemplified by A. carolinensis in Florida and A. conspersus (the Grand Cayman blue-throated anole) on Grand Cayman Island, and 3) the ecology of the Grand Cayman Blue Iguana (Cyclura nubila lewisi).

Anolis carolinensis, which is widely distributed in the southeastern United States, is among the most intensively and extensively studied of reptilian species (it has even been called the “green mouse”), but the majority of studies are laboratory-based and utilize lizards purchased from a single supplier who obtains lizards from a small area in Louisiana. As a consequence, there has been little field validation of laboratory findings, and virtually no knowledge has accrued with respect to geographic variation. The genus itself, with over 300 species (making it the most speciose of amniote genera), is primarily tropical and subtropical in distribution.Anolis carolinensis is the only member of the genus native to temperate regions, and it is near the northern limit of its range in east Tennessee. At this latitude, A. carolinensis is the only reptile that does not hibernate and it is active on sunny winter days when air temperatures are below 0oC a meter or so away from the rock faces on and in which it over-winters. Under way are studies of geographic variation in responses to temperature and moisture, and of reproductive biology, aimed at understanding how this representative of an essentially tropical genus has adapted to life in a decidedly seasonal temperate environment. Further investigations are documenting genetic variation over the range of the species and, through genetic and behavioral studies, elucidating the evolutionary relationships of a distinctive population in southwestern Florida.

James J. Minesky (Ph.D., December 1998) has completed an extensive investigation of habitat use by a population of A. carolinensis along the Little Tennessee River in east Tennessee. At this latitude, the anoles move in the Spring from the wintering sites in which they aggregate to establish territories that are defended through the late Spring and Summer. In late Fall, they move back to the wintering sites. Jim’s study has documented this shift, and characterized seasonal habitat use by the lizards according to sex and age class. In addition, he has identified, using an adaptation of the genetic algorithm as a model selection devise, those habitat features that best explain the presence or absence of anoles in east Tennessee.

David C. Bishop (M.S. December 2000) completed a study of the winter ecology and behavior of A. carolinensis at the same study site utilized by Jim Minesky. David’s goals were to determine whether or not there is any social organization within winter aggregations, to relate winter activity patterns to light and temperature, and to determine whether or not those individual anoles that survive into a second breeding season return to the same wintering sites, and to the same summer territories.

Populations of Anolis carolinensis in Florida have undergone declines in areas where the species co-occurs with the introduced A. sagrei. Studies underway attempt to identify those mechanisms by which this highly successful invader ecologically displaces A. carolinensis. The research has been expanded to include interactions between A. sagrei and the endemic A. conspersus on Grand Cayman Island where the former has relatively recently been introduced. Invasive species are second only to habitat destruction as the cause of extinction of plant and animal species. Although it seems clear that whether or not invasive species are successful in colonizing an area into which they have dispersed or been introduced and whether or not it will have a negative impact on native species is highly species-specific and not necessarily predictable a priori, it is equally clear that the derivation of generalities with respect to invasive species will require both detailed ecological knowledge of the species in question and many additional case studies. It is hoped that our in-depth investigations of A. sagrei as an invasive species will contribute to that required bank of knowledge. Additional studies have been initiated to compare introduced populations of the Cane Toad (Bufo marinus) among themselves and with the ultimate source for all introduced populations in Guyana.

Todd Campbell (Ph.D., May 2000) conducted field studies on spoils islands in Mosquito Lagoon of the Florida Intercoastal Waterway near Canaveral National Seashore, Cape Canaveral, and Merritt Island National Wildlife Refuge. These studies benefitted greatly from the assistance and cooperation of the federal and state agencies responsible for administering the area in which the study was conducted. The islands were used as replicates in experiments that involved the introduction and/or removal of A. carolinensis, and/or the introduction of A.sagrei in order to follow the population trajectories of both species beginning immediately after the invasion by A. sagrei. In a companion study on a series of spoils islands south of his main study area, Todd collaborated with Steph Porter (University of Minnesota) on a comparative study of the diets of the two species.

Glenn P. Gerber (Ph.D., August 2000) studied the comparative behavioral ecology of A. sagrei and A. carolinensis in Florida, and of introduced A. sagrei and native (and endemic) A. conspersus on Grand Cayman Island. His research included ivestigations of 1) intraguild predation and 2) male-male agonistic behavior. The studies on Grand Cayman Island also involved removal experiments in which adult male A. conspersus were removed from an experimental plot (but not control plots) in order to assess any shifts in density or habitat use by adult A. sagrei. This study is of interest because, unlike the situation in Florida, although A. sagrei has rapidly expanded its range on Grand Cayman, it does not appear to be having any impact on the native species.

Kevin G. Smith (Ph.D., in Progress) has initiated the study of Bufo marinusmentioned above. The Cane Toad is the most widely introduced of all amphibian species and is now found on several islands in the West Indies, on Bermuda, in Florida, on Oahu in the Hawaiian Islands, Australia and other Pacific Islands. These introductions are all well-documented as to date and source. As now projected, the study will compare populations in terms of morphometry, parasites, and toxicity of parotoid gland secretions.

Nathan W. Turnbough (Ph.D., in Progress) is beginning a comparative study of food webs within which Anolis sagrei is or is not a component. Given the high densities that populations of A. sagrei can achieve, it seems likely that their introduction should have significant effects throughout the local web.

Todd C. Vincent (Ph.D., August 2002) conducted a combined field and enclosure study of the potential effects of density on reproduction if A. carolinensis and A. sagrei. The field work assessed natural densities of the species at a site in Florida where they occur together, and at an ecologically similar site where A. carolinensisoccurs without A. sagrei. The enclosure studies quantified egg production and egg quality (lipid content) of anoles maintained in different combinations of conspecific and heterospecific pairs.

Justin W. Walguarnery (Ph.D., in Progress) is conducting a comparative study of the behavior and ecology of hatchling/juvenile Anolis carolinensis and A. sagrei at sites in Florida where they are sympatric and at a site where A. carolinensis occurs alone in the absence of A. sagrei. Field-based and lab-based enclosure studies will also be performed.

In 1992, a census of wild Grand Cayman Blue Iguanas, Cyclura nubila lewisi, estimated a population of 100-175 animals. The census conducted in June of 2002 reduced that estimate to 7-25 individuals. This is one of the most endangered lizards in the world, the combined captive and wild population being less than 150 lizards. The National Trust for the Cayman Islands established a captive breeding program in 1990 and, later, a head-starting and release program that is now based at Queen Elizabeth II Botanic Park (QEIIBP). The first young born to captive-released lizards appeared a couple of years ago. There is now concern that the 0.26 ha Botanic Park may not be large enough to support a sustainable population and other potential release sites are being sought. We have initiated studies of the ecology and behavior of these lizards. During the summer of 2001, Bridget Donaldson, who had just received her Master’s degree and yearned for warm and exotic places (we guess) worked with Trust personnel to locate iguana nests and began a telemetry study of iguana use of habitat and space in QEIIBP.

Rachel M. Goodman (M.S., in Progress) is conducting a radiotelemtric study of movement patterns and habitat use by captive-released C. n. lewisi in QEIIBP. She is also gathering data on diet and on behavioral interactions among the resident iguanas.

Not all of the graduate students working under Echternacht’s direction are involved in the various anole projects:

Cara Lin Bridgman (Ph.D., December 2002) has completed several years of field work in a reserve in Taiwan documenting the population density of Mikado Pheasants and studying their ecology. The study emphasizes habitat use of this spectacular bird and make recommendations for its conservation.